She dreamt of new worlds, endless grasslands where animals played in harmony. She wrote little messages that young lovers would pass with every glance, sitting on a sun-dappled park bench. She drew scenes of joy and devotion, covering nearby surfaces with hopes and promises to herself.

Even at night, in those long hours after the sun had left for places unknown, she was kept company by the stars, far-off nebulae, and the stunning beauty of remote planets inching across the twilight canopy above. When she found herself in darkness, she always sought the light.

Her favorite moments were after torrential rains, when the world smelled new, clean, and untouched by society. A pregnant pause waited breathlessly in the air, as if waiting to discover what possibilities the future held. Everything was quiet, save for the lingering drip-drip of runoff finally making its way to ground. She loved the peace the rains brought.

Weaving her stories together, she imagined a vast and intricate web of life and experience, each trembling thread pulling on the rest, culminating in a metered harmony that sang like she believed the stars did. She wanted to feel, to experience, her own story so much, the world of her own creation. She continued to sit, watching and learning of the world from a solitary vantage point, safe but removed.

She knew the world outside wasn’t the same she had created in her mind – danger and scary sounds and more complexities than she could have ever imagined were surely a part of every-day life out there. She long convinced herself of the need to stay hidden, content with her stories and her imagination, building worlds that were wondrous all their own.

Her view didn’t allow her to see many people, obscured as it was by other nearby buildings, but on more days than not a young woman passed by in the early afternoon, a small basket under her arm and a simple cap to block the sun. The traveler had no idea there were endless stories dreamed up about her – about the places she came from and the adventures she found after she walked out of sight. Seeing her often meant it would be a good day to create; there was something touching about her simplicity, ease of gait and steadiness of purpose. There wasn’t any unnecessary complexity or haste in her step, and she seemed to enjoy her daily walk as much as the hidden watcher who smiled, unseen, at her regular appearance.

The almost meditative ritual of watching her pass was interrupted one cloudy day, when the sky looked like it wanted so very badly to pour upon the city below, as the young women tripped on an loose stone in the cobbled street. She caught herself, but her upended basket spilled its contents, even as she regained her footing.

Stooping to collect the various fruits and breads that had been so unceremoniously dropped, something new caught her attention. She has walked that quiet alley a hundred times or more – a quiet reprieve in the middle of otherwise busy days – but she had never actually seen the space, instead merely accepting the peace she felt while walking down it. A small roll and bundle of celery in hand and halfway to her basket, that time she noticed.

The watcher and the walker’s eyes met, both feeling a sudden jolt at being seen and having been caught seeing. Neither looked away, each embarrassed yet transfixed. Slowly the walker straightened and gave a timid, almost dainty wave, nodding her head by way of greeting. Surprising herself, the watcher waved back, and even if her quiet smile didn’t fully make its way to her lips, it shown in her eyes.

Eventually they both looked away, blushing. Glancing back at the street below, minutes later, it was again empty, quiet, and serene. The steely clouds above finally lay down their burden, bringing with it the unending possibility she so loved, this time heavily inspired by the hope she felt that, tomorrow, she might share another smile. 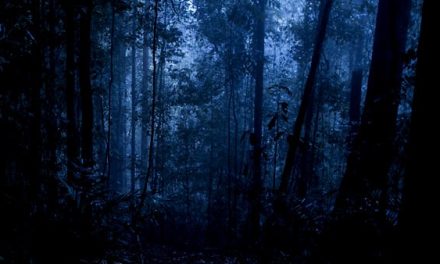