Conquest: Banes in the Dark 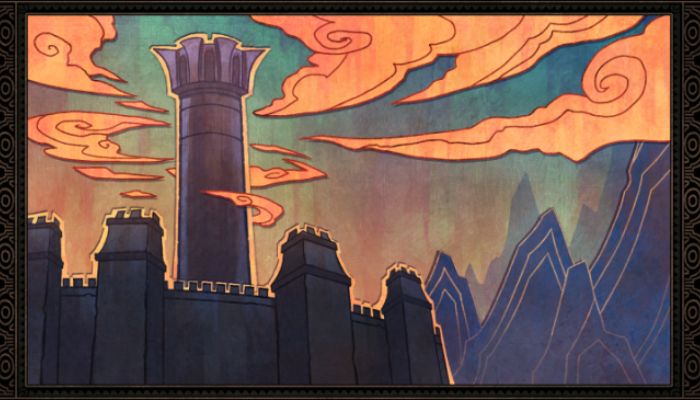 The spire’s entrance was located behind a large gate, effectively sealing it off from the town outside. Rumors persisted about spiritual entities – “Banes” – that would slay any mortal who ventured inside. Stories of monsters hiding in dark places were told across the continent, largely as warnings to children not to roam into unknown lands. Even the eldest residents of Lethian’s Crossing paid these stories heed though, and would not divulge why they feared the spire and the things rumored to live inside.

Prying open the heavy gate, we found evidence of other mortals inside. Bits of cloth in the corners and tool-made scrapes against stone containers suggested that someone had been here, trying to loot the place. It wasn’t long before we found the body of a would-be looter, though there were no obvious signs of distress about him, no reason for his death. Barik found a note from the Iron Guard, who until our arrival provided protection and law to this outpost, providing this man passage into the Oldwalls below the spire, in hopes of finding the Bronze Brotherhood camp at the other end. “Any items acquired inside” were his to keep, as payment for this service.

We found him just inside the second room, with unknown depths yet to traverse.

Cautioned that Banes could only be harmed by magic, but that utilizing such power would awake “other creatures,” we carefully advanced, mindful of whatever mysterious danger had befallen the previous explorer. With meticulous caution we made our way to the Runic Hall, which stood as a near-mirror image of the Ascension Hall inside the mountain spire in Vendrien’s Well. There were runic etchings on the ground, which seemed to pulse with an otherworldly glow at our presence.

Motioning my companions to stay back, I approached the intricate pattern on the ground, feeling spots of warmth and chill as I walked. There were many nodes, but several felt differently. I touched them, lightly, and the strange glow stayed. I looked to my party, standing wide-eyed at the far corner of the hall. Gingerly I touched the last point, and the floor flashed like a lightning bolt, following the intricate pattern I had traced.

Suddenly we all shook with cold as pale moonlight illuminated our faces, a chill wind howling through our clothes. We were atop the great spire, now the second I had seen in as many months. Verse whistled her awe at the sight, miles above the ground, while Barik attempted to protect Sirin from the bitter wind.

I felt a surge of energy, a rush of vigor, much as I had atop the mountain spire. As I looked out over the world I could almost see an ephemeral tether connecting the two spires, feeding off of and providing for one another. As I looked down to my feet, I saw the same ghostly tethers rising up out of the spire and into me. This place was powerful, and in some way it resonated with my presence.

We hadn’t found Banes in the crumbling Oldwalls, we found another piece to a curious puzzle that was slowly emerging from the shadows.

Using the nearby portal, I discovered that I could travel to the mountain spire and back again in a moment, saving days of hard travel. Doubtlessly this would be a welcome advantage in my journey to complete Tunon’s orders.

Conquest: Returning to the Bastard