While some characters in Heroes of the Storm are built to deal damage and others to protect or support teammates, some stalwart heroes are designed to be able to take punishment far in excess of their more frail compatriots. So-called “tanks” play a pivotal role in a team’s composition, and while they each have their unique styles and gameplay elements, today we’re looking at aspects of the game that apply to all tanks, looking at how they can best help their teams succeed.

Most tank characters have some measure of initiate, or ability to start a fight. These include forcing the enemy out of position, changing battlefield conditions, or separating a hero from support, and often a team will specifically wait until their tank has initiated on a character before using their high-damage abilities – ideally the tank will be able to hold that enemy hero in place long enough that the rest of the team can destroy them.

When I began playing tanks, I felt it was my role – both from my own video game experience and from watching other players – to always be in the middle of every fight, soaking up damage that would otherwise be targeting my squishier teammates. I readily admit that I died a lot, seeing my own sacrifice as well-worth the survival of anyone else on my team. Characters can die very quickly in HOTS, and while it took some time for me to be able to pull back my “all-in” playstyle with these characters, for a long while I felt it was my primary responsibility to be the front line, whether my team was facing enemy heroes, NPC mercenaries, or map boss events.

Tanks, by and large, provide very little outgoing damage when compared to most any other class of characters, often requiring multiple hits to take down even the smallest groups of minions. Still though, I believed it was my responsibility to be front and center each time, flailing my weapons around in the hope that I would contribute to my team’s overall success. Recently I had the opportunity to receive some one-on-one training with a semi-professional HOTS player, and he opened my eyes to a far more nuanced role for the tank, and it wholly changed the way I try to contribute to my team’s success.

When trying to capture map objectives or NPC camps, previously I would be the team’s front-line, making sure that my allies were able to do damage from a position of safety; my assumption was that I had the high health pool, I should be in the thick of combat. What I learned however, and subsequent play against higher-level opponents has born this out, was that when taking these objectives, my role isn’t to absorb damage from the NPCs, but rather to keep the enemy out and away from my team while their attention is elsewhere.

Rather than standing in the middle of the objective, doing anemic damage to whatever foe the map has in store, the tank should be more aggressively positioned toward likely areas of attack by the other team. Tanks have a high health pool and initiate capability in order to protect the rest of the team and give them time to either complete the objective or escape. If the tank is elbow-deep in the fight for the objective, it’s not well-positioned to protect the team, and likely has taken a significant amount of damage from the goal as well. With the rest of the team rotating through the fight, they should all remain reasonably healthy while the tank provides cover and protection.

One element that separates HOTS from other lane-defense games is the idea that XP is shared among all members of the team, no matter who dealt the final blow to an enemy. What’s more, if an enemy minion (low-level NPC) dies, so long as any allied hero is in the vicinity, the entire team gets credit for the kill. Since tanks often have miserable damage output, I learned that it’s not always important for me to be in the thick of a minion wave, adding just a sliver of success to my side – the tank can hide in a nearby bush, close enough to still get credit for minion deaths but without revealing their presence to the other team. A lot of a team’s success relies on their knowledge of where the enemy is, and blinding them by staying out of the fight forces them to play more conservatively, without giving up any offensive might.

Besides, if a heavy damage dealer is hiding with me, it’s astoundingly fun to leap out and initiate on a foe who ventured out too far, grab them, and let my partner rip them to shreds. 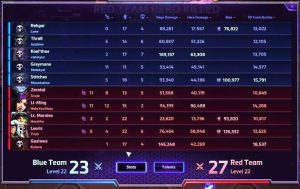 While the score screen lists how much damage tanks absorb during the course of a battle (see the image to the right, particularly the “Role” column for the characters Stitches and Leoric), I think many players put too much emphasis on that raw number and believe it’s the only metric by which a tank’s effectiveness can be measured. From my limited but growing experience with the game, I find that the damage statistic only tells part of the story – a hero that is playing as a defensive buffer for their team won’t be hitting high numbers because they are preventing team fights rather than holding their own in the middle of them.

That isn’t to say that the statistic is meaningless – if one team’s tank has half of the score of the other team’s, legitimate questions could (and perhaps should) be raised about that tank’s effectiveness. If half of a tank’s job is to absorb damage (nominally in the effort to reduce the damage done to the rest of their team), being minimally committed or effective at that half can be a game-deciding factor.

With many tanks and team compositions I still play in the thick of things, but I do my best to keep a more careful eye toward my own positioning and how I can best encourage the other team to react to my movements, rather than dive on top of my squishier teammates. This is particularly true during objectives and efforts to take NPC camps or boss monsters, where my team could easily be caught unawares.

Everything I’ve learned through the coaching process has been about taking a more strategic and long-term view of the matches I play. Instead of scrambling to accomplish the thing I have to do right now, it’s more successful to formulate a plan of how what I’m doing now will impact what I should do next, and how that will force the other team to respond. Having a plan means I can deal with hiccups or unexpected events in a way that still furthers my end goal, without scrambling to adjust to a changing battlefield landscape, always playing catch-up as the tide of battle ebbs and flows.

Every tank hero plays uniquely, but as with having a general overview and plan for the map as a whole, having a broader strategy for playing the role allows me to identify opportunities, adjust tactics, and use the right character for a given situation, even if I’m unfamiliar with their specific traits or talents.

With any luck I hope you’ve found these thoughts on tanking helpful, and as long-time HOTS commentator Kevin always says, “I’ll see you … in the Nexus.”