One of the reasons I’m not generally a fan of board games is that I get too highly invested in the outcome (read: competitive). I’m less competitive with video games—I routinely play with people who are better than I could ever be—but still I loathe dying and tend to pick one of three general character classes to increase my survivability: the sniper, the rogue, or the tank.

Sniper characters tend to do amazing amounts of damage, so long as their targets are far away, since they have little defensive capability. Their ability to survive comes from their range and massive damage output. Very often these are “glass cannons.”

Rogue characters similarly do a large amount of damage, but usually from close range, relying on evasive maneuvers to avoid counterattacks. Speed and stealth are their mainstays.

And then there’s the tank—characters which often have anemic damage output but have an insane number of hit points, defense, or other skills that make them simply troublesome to kill. Their job is to take punishment instead of their squishier teammates, and they excel at it.

The other common video game character archetype, which is not usually my bailiwick, is that of the healer. Often with few offensive capabilities, the healer is great when there are friendlies in front of them, and all but a guaranteed kill if they’re caught alone. For some reason I’m just not big on playing healers in most games, wanting to take a more proactive or initiatory role rather than a passive or supportive one.

Today I want to talk about a time where I did play a healer, which also served as tank and massive damage dealer, back in the days when I played the original Guild Wars. My relatively recent disappointment and boycotting of Arenanet notwithstanding (more on that in some future post), they had a fantastic idea in their minds when they implemented several oddly-synergistic mechanics.

Note that I’m pulling all of this from my memories of a game more than 10 years old, so while I try my best, some specific aspects may be off the mark.

In Guild Wars, everyone at a given character level possessed the same amount of base hit points—e.g. at max level (20) everyone had 460 HP. There were modifications to make your character more resilient, such as by adding extra armour or increased hit points, but there were also mods that would actively decrease your hit points, in turn granting you a much higher ability to perform some aspect of your class. Any one of these supreme runes would cost you 75 HP from your base, but the trade off was usually worth it, particularly for ranged or other back-line characters.

If someone were so inclined, they could raise each of their four class-based stats by equipping these powerful runes. While not usually recommended—most people equipping one at most—they game would certainly let you. With 4 stats, each costing the character 75HP, someone could bring themselves down to 160 health, which would be incredibly problematic when it came to combat. Some players however went even farther and added a fifth rune (doubling up on the penalty, but receiving no benefit), dropping their HP to 95, which in most cases would be practically suicidal..

There’s an early quest where one of the rewards is a magical focus. With mediocre stats, it would not be noteworthy if not for one particular aspect—an additional -40 HP penalty. Most players threw it away without another thought, often only realizing too late that they could not acquire it again.

The reason I bring up this item is that, when used in conjunction with the above overly-runed armour, a character would have a whopping 55 HP. Why would this ever be advantageous?

Damage in Guild Wars came in two types: set amounts and drain-over-time. If a character swung a sword, it would do say 100 damage, which would be applied against the enemy health, after accounting for armour. Alternatively if a necromancer cast a spell which sapped life from a foe, they could lose five or ten HP, but would do so over and over again for as long as the spell lasted. Healing worked the same way: spot heals for a particular amount, or heals over time.

One of the most overlooked spells in the Monk’s (healing class) grimoire was a lowly protection spell that limited all incoming static damage to 10% of a character’s maximum health, rounded down. It didn’t do anything against drain effects, but if someone had the standard 460 HP, they would not be able to lose more than 46 HP per blow, no matter how hard it would have hit otherwise.

Monks who put themselves at 55 HP were doing something very clever, something the developers probably had in mind when they released the game: they were casting protection on themselves (limiting all incoming damage to 5 per hit), and simultaneously adding a healing-over-time effect that would recover 10, 20, maybe even 30 HP per second. So long as they didn’t take 11 hits all at once, and were able to keep their spells up, they were functionally immune from standard damage.

While an interesting quirks of the mechanics, those two spells alone wouldn’t help the Monk clear out any areas. In comes a very special skill, Retaliation, which deals damage to any target that hits the protected character. Now you may see where this is going—with the stat-boosting runes, Retaliation would hit like a Mack truck, all the while the Monk would be invincible. The faster the foe hit, the quicker they’d die.

There was a fair amount of skill in balancing the casting and cooldown time on all of these spells, on top of being very careful to only engage enemies who did standard damage and not drains, but the general gist of the build was “stop hitting yourself.” Games such as Diablo III and other RPGs have followed suit with similar mechanics, though I don’t think anyone did it as cleanly or as effectively as Guild Wars.

I genuinely enjoyed my 55 HP monk, particularly strolling through some of the game’s hardest zones without a care in the world—so long as I could maintain my spells, everything would be fine. It was a great way to ensure my own survival, take down hordes of foes, and see some real success playing a character class I’m not usually into.

Of late I have been playing Grim Dawn, another action-RPG, and there is a particular combination of stats, powers, and equipment that emulates many features of the old 55 HP monk, and as my character comes together over time, I fondly remember those days of clearing maps as a Monk (again, the healing class), far faster than I could in any other role.

Header image from promotional material for the new game Sekiro: Shadows Die Twice by From Software. I did not use any imagery from Guild Wars as a small way of maintaining my protest against their managerial and representation decisions over the past few years.

Claiming of the Gilded Hallow 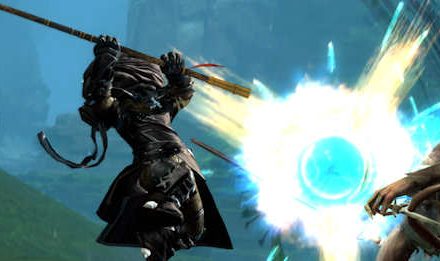