It’s not that the plucky band of privateers specifically wanted to start a small peasant rebellion against the ruling Montaigne aristocracy, but their ideas of freedom and self-governance quickly caught on with the area’s farmers, and while some may call it “sowing discord” or “leading an uprising,” they preferred to think of themselves as “free thinkers with good ideas.” They didn’t come up with the idea of burning the mayor’s manor after all, even if they were on-hand to celebrate it going up in flames.

Deciding that the arrival of the imperial garrison was their cue to leave, the jovial and witty swashbucklers fought their way out of town while the locals, armed with pitchforks, axes, and hoes, shouted for their independence from the repressive government regime. The party, being well-traveled and well-experienced in matters of the blade, made their escape without embarrassing too many of l’Empereur’s troops, or the nobility leading them. There may have been a few stab wounds, but nothing truly fatal, without prompt medical attention.

Loosing their ship from the sleepy moor, they made haste to the capital several days away, both for rest and refreshment but also to visit an old actor friend who had finally received the invitation of a lifetime—the chance to perform before the imperial Grand Gala. They wouldn’t miss his show for the world.

While two of the group, more battle-weary than the rest, recuperated from their row with the army, the two more social number decided to poke around the castle ahead of the festivities. Donning borrowed finery, “Captain Ursidae” and “the Baron” soon slipped their way into the throngs of country nobility arriving for the annual event, enjoying the finest wine and most delectable of cheeses.

“Halt!” a cry bellowed out from a pained voice not long into the evening. The entire assemblage turned to see an out-of-breath and ragged noble, looking to all the world as if he had just ridden for three days and nights without stopping, arm tightly bandaged yet still bleeding, pointing an accusing finger at the Baron and Captain Ursidae. “These men spurred on the rebellion—the same uprising for which I came to the capital to request aid!”

Guards neared and, not being able to prove their noble birth, the pair were thrown into the dungeon until their case could be properly adjudicated, likely long after the Grand Gala had concluded. Frowning in a huff, they realized they would miss their friend’s big moment—that fact far more distressing to the high-minded and flippant duo than the conditions of their stay in the imperial prison.

News travels quickly through a small, politically-active hamlet like the capital, and word soon reached the rest of the adventuring party that two anarchists had attempted to blow up l’Empereur. Or that two spies from the rival nation of Avalonia had been caught in the palace. Or that two master assassins had infiltrated the Grand Gala and were apprehended before making their move. Though each of the stories conflicted, it was clear to all that their friends were involved, and had been found out. It was high time to develop a rescue plan.

Linnus, the party’s mad inventor and occasional accidental anarchist, contacted local agents of the Rilasciare—an anti-nobility secret society he may or may not have helped found—and obtained secret tunnels which ran beneath the palace. With careful navigation they could be used to get almost anywhere within the sprawling compound, but a winter of torrential rain had caused them all to be flooded. Unless the party could breathe under water, there would be no escape that way.

“Unless—” Linnus pondered, tapping a twisted finger against his thin lips. “What if we could breathe under water?” He quickly got to work sketching out his mad designs on the wall of the small basement that had become their base of operations.

Two large wine barrels, sealed together with wax and leather, would serve as a means to travel through the flooded passages. Powered by a handcrank connected to a small external propeller, they would keep a small tin of potassium nitrate burning to create oxygen. If the plans were crude, the final mock-up was even moreso, neither water-tight nor particularly maneuverable.

“It doesn’t have any windows!” his companion complained, eyeing the contraption with suspicion. “How are we going to navigate?” Tanner was a large fellow, and cramped places were decidedly not his style.

“I have the maps,” Linnus declared proudly. “We shall travel in straight lines until meet a wall, at which point we will—in unison—roll to the right or to the left according to the meticulous route I have planned.” He seemed quite pleased with himself and his strange contraption.

Rolling off a small skiff their friends piloted down the city’s main waterway, the party’s crude submarine/underwater tomb began to leak, its crude joints not designed for any use even remotely similar. With every jolt and turn, wash of the waves and turn of the crank, the barrels started to fill, particularly once they began striking walls in accordance with Linnus’ grand navigation strategy.

Drenched up to their necks, they somehow meandered through the bowels of the palace, arriving at their destination, a small food pantry, as their vessel began disintegrating beneath their sodden feet. Dripping and gasping for air, they began their adventure through the castle’s dimly-lit underbelly.

Distracting and disarming the two guards stationed outside the cells, the party reunited with their compatriots, still dressed in their party finery. “You came to rescue us!” the Captain smiled broadly when the door flew open. “But how did you get in, and why are you all dripping?”

“We came in a submarine,” Linnus boasted.

“It’s like a boat, but instead of going on the water, it goes under it. Also, we need to find another way out of the castle.”

Sneaking through the building to avoid guard patrols—all of whom were on high-alert owing to the sheer number of noble families represented at the Grand Gala—the assembled party eventually found themselves on a balcony overlooking the large banquet hall. The banquet hall where first feast of the weekend was underway, with hundreds of guests seated at long tables prepared for the purpose. On the other end of the expansive room they spied a courtyard—and their ticket to freedom.

Agreeing that no matter how stealthy their approach they were bound to attract attention, the spoony rogues opted for a direct—and hopefully story-inspiring— approach. Leaping from the balcony to a wide, crystal-laden chandelier with the loud cry of “freedom!” they began to swing back and forth until they could leap to the next hanging purchase, much to the chagrin, confusion, and ire of the finely-dressed dinner guests below, who quickly realized the sudden noise wasn’t a part of the evening’s regular entertainment.

Swaying and swinging to the fourth chandelier, the party had gained enormous momentum and, at the apex of its swing, Tanner cut the rope which sent the large structure flying through the air. As it careened toward the wall, Linnus shot out the giant window in front of them with his twin flintlock pistols, opening a pathway to the courtyard outside.

Crashing through the damaged window, shards of glass and crystal exploded into the mass of confused guards below, summoned by the harried shouts of the Gala’s protectors. Landing on a haystack, the party rolled to their feet as the chandelier structure crushed a stable, sending panicked and wild horses kicking into the growing confusion.

Between courtyard guards attempting to piece together what just happened, banquet hall guests pressing to the doors to see for themselves, horses running amok, and the sounds of panic, the swashbuckling heroes espied two wagons bearing the imperial seal, wagons which had been heavily guarded until a quartet of people riding a chandelier came smashing out of the dining hall and set the yard into chaos. Leaping onto the wagons, they whipped the attached draft horses into motion, accelerating out of the gate, hoping to leave l’Empereur’s estate far behind.

Not content to let the grinning adventurers go without a fight, several guards were able to wrangle horses and give chase, loaded flintlocks of their own at the ready. The twisting mountain roads of Charouse, the large range behind the palace, tested Tanner and the Baron’s ability to guide the unwieldy carriages, even as Linnus climbed atop, drawing and firing his brace of pistols at their pursuers as fast as he could manage, his face illuminated by the bright muzzle flashes in the dark, windswept night.

Seeing the guards nearing, the Baron made the snap decision to jackknife the cart he alone rode, sending it tumbling to its side while he leaped to join his friends. Catching Linnus’ hand, he turned in time to see the guards and their mounts trip and tumble over the upturned carriage blocking the road. The two embraced in celebration of a job well done, cheering at their successes. The road ahead was long but filled with turn-offs and side passages which lead into the woods; in mere moments it would be impossible to track them.

“Hey, Captain?” Linnus called from inside the carriage after he began to relax from their harried flight. “You might want to look at what we’ve got back here.”

“We haven’t accidentally kidnapped l’Empereur, have we?” Ursidae laughed, the evening’s excitement still riding high in his veins.

“No, I think it’s actually something good—I think we’ve stolen the warchest!”

True to his word, the carriage with which they had made their escape from the imperial palace held a large, wooden container with thousands and thousands of shiny gold coins inside. “Money to help put down the rebellion once and for all,” the Baron realized. “An army won’t march if it’s not paid.”

Linnus’ cackling echoed into the darkness as he began to count their unexpected reward. Over 80,000 Guilder—enough to buy and provision a large warship, or several small armies—sat in their possession.

Deciding they had recovered the seed of their eventual vast fortune, the group instantly began planning how they were going to leverage their treasure into even greater schemes.

This story was first introduced to me by a user named Exculpatrix on the SomethingAwful.com forums, detailing a 7th Sea role-playing campaign they partook in, and which formed the basis for my retelling above. 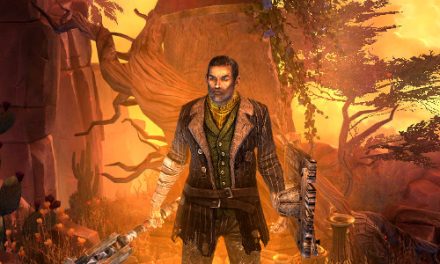