Questions about human morality and societal norms aside, and ignoring the vast packs of radiation-mutated deer, moles, and bears that wander the land, sometimes it’s the ones you expect least who can do the most damage.

Foraging for supplies, I came across a greenhouse maintained by a dozen or so Mr. Handy units, pruning and tending to their crop of mutant fruit and vegetables. As pleasant as ever, they welcomed me in and even offered to make me a spot of coffee, though I didn’t see any cups or  places to sit. They happily took a few caps in exchange for goods to be delivered to my impromptu workshop, particularly much-needed heating fuel, and offered me a “complimentary sampling” of their produce.

Looking at the distended, misshapen, warty products of their labor, I frowned. Beggars can’t be choosers, but I know that even the cleanest-looking water can be filled with potent radiation; I for one do not like the idea of turning into a diseased, gangrenous, mindless ghoul any time soon. It wasn’t until a helpful Mr. Handy prompted that the food was “remarkably rad-free” that I dared take one that at least could have resembled an apple, if only in the dark.

Call me sentimental but I wasn’t going to eat it in front of them just in case I didn’t like it – besides, I had eaten some roasted molerat late in the morning and it was anyone’s guess when my next meal would come shambling over the horizon. I said a gracious “thank you” and fit the lumpy fruit into my pack. With what I can only assume was a grin it hovered away, content that I had accepted their gift.

As the leader of their little robot collective processed my order, I casually looked around the greenhouse, what little there was to see. The only thing to really catch my attention was a classic Nuka-Cola dispenser near the back door. Surprisingly well-maintained, it looked like it might even have supply left, but my investigations were cut very short with a blaring alarm.

“Intruder!” the Mr. Handy bots blared in unison, hovering menacingly toward me. “No thieves allowed!”

I hadn’t even done anything! No bobby pins in hand, no autopicker on my hip, nothing, but they assumed that because I was human, I was here to rob them of their frosty beverages – ignoring the fact that I just traded them most all of my caps in a deal that was fair to everyone. Their steely eyes glowed red and I heard the tell-tale hum of laser pistols charging. It was definitely time to make my exit.

I am happy to report that, after all was said and done, my goods were delivered, on-time and undamaged, just as I had asked. And I was able to take most of the scrap from our little rumble and turn it into much needed water purification units for the river near the encampment. Maybe someone’ll take over the old greenhouse in those rude robots’ absence.

I sure hope so; that apple-thing wasn’t half bad after all, even if it stung like licking a battery with every bite. 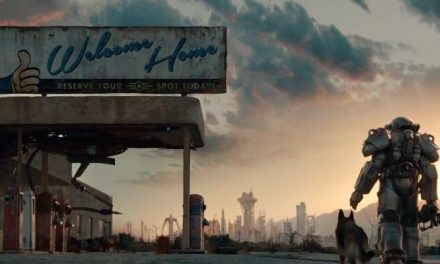