A Man out of Time

A performance of Rob Costlow’s “Twilight” fading in to the background of the busy club, Edgar was pleased by the small applause. He didn’t necessarily play for the prestige of playing, but rather for the action itself and the connection it brought him to the mortals sitting inside the Blue Note. He smiled as he watched them order drinks, discuss all manner of topics, and in ever respect conform to and reinforce the social atmosphere that was, for a few hours every week, their home. Always the student, Edgar found himself fascinated by the dance, subtle as it was. Perhaps it was his forced removal from the games of polite courtesy that caught his interest, or merely perhaps it was an aspect of humanity that never changed – though the words may, the tones and intentions were always the same.

He looked up from the club ﬂoor to ﬁnd his gaze meeting Miranda’s. ’Randie’ to friends, ’Mirandia’ by birth, he wondered how many of the dozens she served every evening knew how rare she was. A beautiful woman by any standards, she had somewhere mastered the art of polite conversation and feigned interest that netted waitresses large tips. What she brought that others didn’t however was the sense of sincerity; it was hard to beleive she wasn’t actually interested in what others said to try and impress her. Edgar knew better though, smiling to himself at the thought. She revealed, one night after closing, that she was most impressed, and slightly ﬂattered, that he didn’t put on a ’front’ for her – he wasn’t out ’to get her’ for her looks or any other reason. He was just himself, and let her be no-one else but the small-town girl raised in Nevada.

Though her depth in musical and popular culture far surpassed his own, he readily admitted, he was more than capable of holding a conversation in most topics – he wasn’t a fan of most art but could talk about it, and there was never a shortage of theory to be shared as related to the human psyche; she was for a long period a student of psychology he found, which delighted him. He didn’t know why, but he found her somehow familiar, somehow safe. Perhaps this feeling should have worried him, but he paid it little attention – he had long ago learned to take things as they came, and respect that which was rarely found.

Though often found not playing what would be considered usual for a club centered around jazz music, the usual Blue Note crowd gave Edgar credit for his skill and stage presence. Even oﬀ to the side of the small performance space, patrons’ eyes naturally gravitated toward the simply-dressed pianist in their midst. One or two times other kindred had wandered into the club and had almost overlooked him – he wasn’t after all wearing his traditional cowboy hat nor bow tie, but rather a simple white button-down with a black knit sweater. They couldn’t however fail to notice his gaze when he found an unexpected vampire in ’his’ club. He had made deals to ensure that none would feed in several such locations around the city, and seeing another of his kind, even one he expected, raised his hackles unerringly.

As Mirandia, as he always called her in his due sense of propriety, which she thought was cute, handed him a small wineglass containing a carignane, his most recent favorite, she glanced to the accompanying napkin and winked with a smile before returning to the bar’s guests. Glancing down as he began to pay, a twist on Chopin’s Raindrop Prelude, her ﬂowing handwriting was visible from beneath the glass.

Just a few words I penned about an old vampire character of mine.
Originally posted in May of 2007 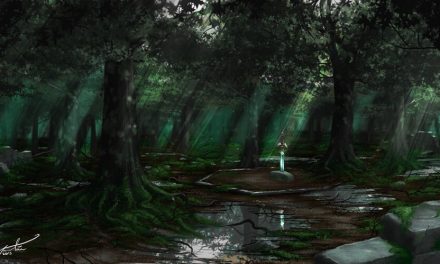