Stepping out of the grime- and refuse-filled streets for a moment, it’s about time for me to ride in on my high horse and complain about something I just don’t understand about the DC catastrophe: blacklights. I completely get the idea that ultraviolet light can help sterilize and neutralize problematic bugs like e. coli and giardia, but something tells me the bright and sunny spring we’re having isn’t doing much to impact the untold million gallons of industrial poison that has been released in and on the city. Why then does the entrance to every stronghold and CDC containment unit have to assault our eyes with what feels like multiple tanning beds-worth of UV?

It must be at least a hundred years now since scientists figured out what spectra of light specifically allow humans to see servicably well in the dark, without losing their night vision—think of all those movies where dull red lights highlight the actors’ eyes to signify a covert mission of some kind. Yet with all that time and progress, each and every occasion Israel and I have to duck inside a relatively safe area, be it day or night, our eyes are absolutely assaulted with painful and headache-inducing UV bulbs. Are they trying to give us a nice summer tan or perhaps just waste electricity instead?

Full decontamination procedure, that I understand; after exposure to toxins, a combination of shower and UV treatment is performed before removing the hazmat suit. Such procedure is so prevalent in FEMA and CERA plans that they have pre-fabbed decontamination structures ready to deploy anywhere in the country. It feels like half of them have been installed in DC, but it all seems a little moot since Izzy and I aren’t equipped with full biohazard gear. I’m very thankful for the thin air filter masks we’ve been given—little more than face-sealing rubber with some paper inserts—and they’ve certainly proven their worth in the hazy, poison-choked air of the dark zones, but something tells me the UV baths aren’t doing us any good.

Some of the settlement rescuees we’ve helped out have started calling us “the cool guys” since we never seem to take off our sunglasses. While it’s at least fun to have a moniker, we aren’t hiding our eyes to cut a striking figure—we’re doing it because we’re tired of getting massive headaches every time we return back to base. Every time I walk through an entrance it feels like my eyes are getting sunburned.

I well-understand that protecting people and making them feel protected are two very different animals, and our job is to do both while we’re out on the streets. Personally it seems like the powers that be have gone a bit overboard on the “making them feel protected” side rather than actually protecting them. We keep running into other SHD agents out in the field, but they’re usually beleagured or pinned down by either the weight of their assignment or by constant enemy contact. 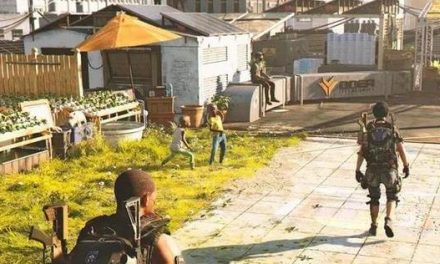