Though I was cautioned against traveling the direct route from the Crossroads into lands further south, I trusted my feet on solid ground much more than I did my ability to swim, should something go amiss while skirting the edge of the continent. With new provisions and good rest, I continued my travels, accompanied at least for a while by a Horde Guard who was assigned to patrol the Gold Road.

She told me that she had grown up in the Barrens, and to stay close to the path, particularly when camping at night – both the Wailing Caverns and Stagnant Oasis lay nearby, areas that had caused no end of trouble for travelers in the area. Before she turned back North she marked several safe sources of water and good hunting grounds, should I decide to eat something warm for a change. I thanked her and she wished me well on my journey, assuring me that my sister will be proud of me, when we meet again.

It had been nice traveling with someone else, though I do admit the fact that she was fully trained and armed for battle helped, and though I was saddened to see her go, I appreciated her attention to duty. Hers was to ensure the security of the Gold Road for all travelers, not just a young farming orc like myself. Reflecting on what my sister’s journey could have been like, I hoped she would have been granted opportunity to inspire others. Sina was always great with the other children and loved seeing problems solved.

Eventually I reached the Great Divide, a deep and terrible gorge carved into the middle of the Barrens, effectively bisecting it. Looking over the rim and into its depths, I could see slowly-roiling pits of lava and fire belching up from deep underground. I shuddered to think what could have caused such a terrible scar on the land, but for the moment resigned myself to finding a method to cross the wide chasm. The air around it was acrid and sooty, and there was no way I would survive a climb down into its depths, let alone the climb back up, if I hadn’t already succumbed to the terrible noxious fumes that poured from the fiery lava pools.

While I scratched at my chin, considering what few options lay before me, another traveler rode past on a great-crested plains lasher. “Can’t go across,” he shrugged, the troll speaking perfect orc, without any hint of the affectation usually associated with their race. “That is, unless you can fly.” I asked him how other travelers, like himself, found their way to the Southern Barrens, at which he petted his mount on the rump. “Grizzle here has the stamina of a plains kodo – when I need to cross I travel East or West, beyond the scar, then make my way back.”

He pointed out that traveling Westward would take me farther inland, near the dangerous Wailing Caverns I had been warned about, but that to the East there were dangerous animals that congregated at a nearby river. I thanked him for his advice, at which he waved and continued about his way, turning northward, presumably back to the Crossroads. He was making great time on his riding lizard, and I was quite envious of his ability to cross the miles with ease. Perhaps one day I, too, would have a powerful mount to call my own.

Admittedly, however, I didn’t suspect I’d have much need for one after I found Sina and we returned home – it would be cruel to keep a creature used to widely roaming the hills and savannas of Kalimdor stuck on a small Durotar farm. Maybe I could gift it to another young traveler, one whose adventures were just starting. That thought made me smile, that one day, hopefully soon, I could be looked up to as a worldly pioneer, who had seen things not even imagined by others in my village.

As I turned to the East, the guard’s stern warning about the Wailing Caverns dissuading me from wanting to go anywhere near those caves, I thought about the idea of fame. I didn’t want to be famous, or even get recognition for the things I’d done and places I’d visited, but I suppose that kind of thing just sort of happens. Everywhere you travel leaves a mark on you, a change of perspective at the very least. After enough time, you start to look different, act different. Not so far off that people wouldn’t recognize you, I imagined, but they could recognize that you had been places and had done things. Just like I was in awe of the amazing people in Orgrimmar, without them trying to catch my attention. Their stories were written in how they walked, how they talked, what they wore, and how they interacted with the world.

Climbing a small hill and brandishing my ax to dissuade some hungry lashers from thinking I was going to be an easy meal, I noticed a small sprig of mageroyal growing on the leeward slope. Back home even that little twig would have fetched a fortune, because it didn’t grow in the red clay earth of Durotar. Out in the wilds, though, this had been the third or fourth time I had seen it. Other than the miles and miles of scrubland, maybe “the Barrens” was a pretty poor name for this area after all; there was an amazing amount of life sprouting up everywhere.

Avoiding the Stagnant Oasis, which while lush with trees and healthy grasses, I had been warned of the dangers gathered therein, I continued my careful hike near the rim of the great divide. Just across it, when the smoke plumes cleared, I could see the type of land the Barrens may have once been – the same rolling ground, but this time covered in green grasses, with trees instead of razorvine reaching into the skies. Settling down to camp for the evening, I hoped to be on that other side soon enough, ever closer to finding my sister and returning home.

← Previous – Rogg: At the Crossroads Next – Rogg: Soaked → 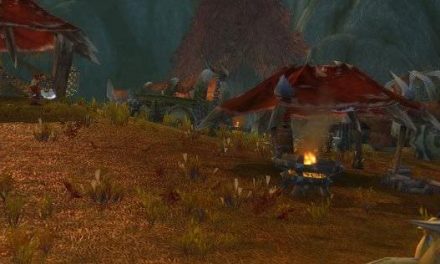