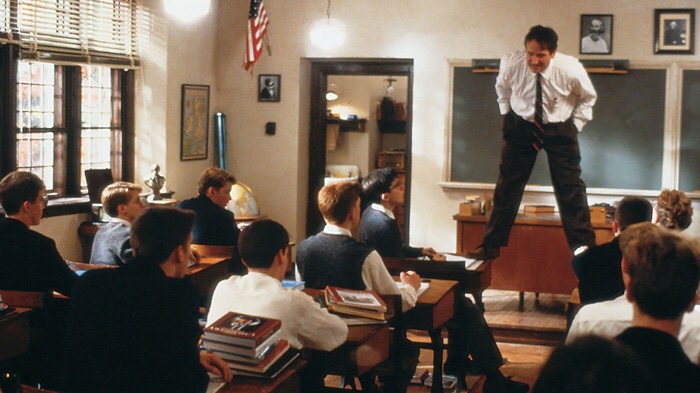 Consistently topping the charts of my favorite movies for more than twenty-five years, Dead Poets Society is a powerful look at the pressures of society and the nature of conformity, of free-expression and individuality in the face of repression. Above all, it’s the story of growing up and coming to terms with life itself.

Though Peter Weir’s 1989 classic has long been my favorite film, I actually haven’t seen it in some time, making it a fitting addition to this Half-Remembered Movies category. For a long semester in college I thought about creating a DPS stage production, and even got so far as to write/compile a working script before dropping it. Though much of the film’s climax takes place in and around the theatre, and I myself a student of drama, that wasn’t the connection that spoke most clearly to me.

Some have criticized the movie for mis-quoting classic works (e.g. “I sound my barbaric yawp over the rooftops of the world” isn’t quite what Whitman actually wrote) and for Robin Williams’ sometimes too-comical delivery, but for me the most important moments weren’t the larger-than-life, break-the-mold scenes that are most often referenced. Instead, I’ve always been particular to the quiet moments that both build the world and develop the characters, beyond their archetypical roles.

For example, the lead character Neil (of the ensemble) sits down with his English professor and they talk about life and passion over tea and a picture of Keating’s wife, who is far away. It shows that Keating truly believes in what he’s doing, his unorthodox teaching methods, and that the young boy found, in that moment, the courage to stand up and live his own life. It’s such a powerful, subdued scene that absolutely gets me every time.

While the truth of many old poets’ lives has been heavily skewed (Thoreau wrote “Walden” while sojourning on a friend’s estate, if memory serves), the stories presented in the movie serve as inspiration, as idealized acts of defiance against complacency and idleness. The boys (and later their female friends) began exploring the works of old not as stagnant pieces, but as the result of or in response to the world around them. They begin to feel the power of individuality, even going so far as to create their own works of art.

On top of the stellar performance by Robin Williams, DPS cemented in me a true enjoyment and appreciation for the acting work of Josh Charles and Ethan Hawke, both in their teens during the filming. I particularly love Hawke’s spin on Hamlet (2000) and Charles’ earnest delivery in the much-underrated series Sports Night.

“The dangers of conformity” is a phrase I think about with some regularity. Whether dealing with politics, everyday life, or the working world, so often I feel that many of us are trapped by what we think we “should” do, as vaguely decreed by some indeterminate yet omnipresent authority.

Veering slightly, I want to talk about my role in a very long-running role-playing game I helped run for years and years. I was known as the “Consequences” storyteller, because whenever someone wanted their character to go off the proverbial beaten path, I was the one who ran the scene. In many cases this would lead to something dire or dangerous, but a few players picked up on the fact that I wasn’t just being cruel; I was dictating a reasonable and measured response from the world at large.

Putting that more into context of DPS, the characters in the story made their own decisions, whether “right” or “wrong” in society’s eyes. While I believe they should be lauded for their actions and their desire to be individuals, that isn’t to say that making those choices is without consequence.

I liken it to the First Amendment in our Bill of Rights; the government can’t censor you from saying something, but that doesn’t mean you’re in the clear to say any and everything and that you can wave the Constitution around like a Aegis cloak. Rebellion, disobedience, and personal choice all have their place, but one must be aware of the consequences. In some cases, this makes the act of defiance all the more heroic (I think of the gay pride marches in sub-Saharan Africa where, in many countries, promoting homosexuality is a capital offense).

For their choices, whether we as viewers agree with or even understand the outcomes, the DPS characters’ lives, careers, relationships, and futures were torn asunder. To me the movie isn’t one about mindlessly doing whatever feels right in the moment (I truly feel that the thankfully short-lived “YOLO” movement was born from a misunderstanding of “carpe diem”), but about making choices and living with the consequences, and the importance of both halves of the equation.

I am very lucky to have not grown up in a repressive, formulaic environment like depicted in the film, but I know in so many other ways modern life is just as filled with the overwhelming social pressures and expectations that are exemplified in the movie’s authoritarian setting.

Dead Poets Society reminds me to examine my own expectations, and determine whether they’re truly my own or instead imposed from modern American culture. Hopefully, the movie continues to remind others, too.